When Life is Broken 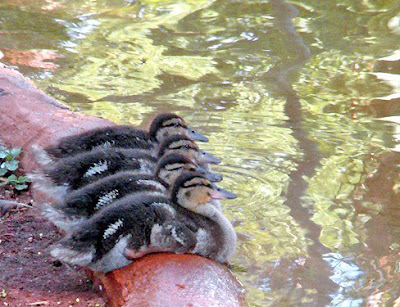 Ducklings at the Honolulu zoo

Often as I walk down Manoa road from where I live in the back of Manoa valley I see a little dog that has been there for years. I recently noticed as I was walking by that as he used his front paws to pull himself along, his hind legs were paralyzed. I noticed people would stop and give affection to & pet this little dog.

Not long after that, I noticed another man, not a block from the other who was walking two dogs. One of them had one of his front legs missing, so it hopped along to keep up with the other dog & his master. Both people who owned these disabled dogs loved them enough not to have them put down, but still saw value and companionship in them.

It made me think of how precious we all are in God’s eyes. Even those who may not be lovely in the eyes of others and might otherwise be cast off are still loved and cherished by God.

Last week, as I was walking to Lyon Arboretum, I walked across a bridge over a small stream where I always see several ducks lounging in the water or along its banks. This time, I saw a lone, young duckling which was about two weeks old.

There was an elderly woman in a robe with curlers and a scarf on her head at the top of the embankment. She was throwing bread crumbs down to the duckling. When I first started talking to her, she was a bit aloof, but soon warmed up to me. She told me that she counted 13 ducklings after they first hatched, but once they hatched the mother quickly abandoned them.

Mongooses were brought to to try & control the rat problem only to discover that rats are nocturnal while mongooses are active during the day. This meant that rats were not the main source of food for the mongooses but instead became small birds. More than likely, most of the small ducklings that had disappeared were a snack for the mongooses. The elderly woman told me she had seen a mongoose grab a live bird in her yard and run off with it.

The elderly woman caring for the young duckling abandoned by its mother reminded me of how in a perfect world a child’s parents should be caring for him or her. A person in spiritual authority should be one who encourages their flock in the ways of God & should also be a good example. When we are void of godly parental or spiritual examples in our lives, God often brings encouragement from other sources in His perfect timing.

Yesterday, I was given the diagnosis of prostate cancer. I don’t think it has sunk in & I kind of feel numb about it. I shared this news with several people who I felt would care about what I am going through.

It is funny how you never know how people might react to this news (including myself). Of course many Christian friends told me they are praying for me and shared bible verses with me. I know they mean well, and I know God is in this even if I don’t know where. My father died of leukemia 6 years ago and had been a pastor who loved & served God. He was the same man at home as he was behind the pulpit. I always thought that in times of tragedy one would feel God’s comforting presence in the midst of the pain. This was not the case in my father’s illness & death.

Many people prayed for my father for healing, yet healing never came & he succumbed to the disease. Another acquaintance of mine died of cancer recently that had an army of prayer support. When people say they are praying for me, it is of little comfort because of this track record. I do not know where this road will lead. All I can do is try & commit it to God & take one day at a time. I think it is important to be real and not put on a mask that every day is a Jesus day.

My brother in offered to fly me there & have treatment but there are no facilities there my insurance would cover. Other friends have told me to let them know if there is anything they can do. I have no family living in .

A friend who does not claim to be a Christian, but is like a brother to me lives in Canada and offered to drop everything and fly to Honolulu & be with me should I opt for surgery or just need support. We first became pen pals while he was living in over ten years ago. Part of his e-mail address is “fiel”. Fiel is Portuguese for “faithful”. He has proven to be a faithful friend and shown unconditional love so many times over the years. He has literally been a godsend in my life.

I also got a call from a lesbian acquaintance of mine who said she would be here for me no matter what I need. She offered to pick me up & take me to appointments & be with me in the doctor’s office if I wanted her to be. She also said that if she did not hear from me, she would be calling back anyway and that I am not to be a lone ranger in this. This is commitment, putting actions to their words.

I also heard from a friend (who I shared my illness with yesterday) today who said, “I kept feeling anxious about not having any travel plans to a warm destination for my spring break, so I went ahead and booked a flight on United to …” If only all I had to feel anxious about was where to take a vacation…

I have read every word of what you have written. I am moved and I am tearful. I am one of your newest friends I should think, but this does not make me feel any less intensely for what you face. Thanks for alerting me to this -- thanks for including me in your news loop. Joey, feel my embrace, please, across the ocean. They feel like pitiful words, but please know that my children and I are with you.