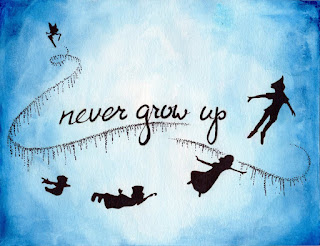 I was thinking recently that a lot of people who are in YWAM may have the Peter Pan Syndrome. Socially immature persons in their 30's or so who like to enjoy themselves, like teenagers without responsibility. They may want to avoid a serious job or relationship. They are people who are scared of & don't want to grow up. They want to have adventure & fun. They do not want to loose that sense of comfort.


The 12 years I was in YWAM, even though I was obviously growing older, each new school would mostly have students from their late teens to early twenties, so I was around young people all the time & it did not seem like I was growing older since the new recruits usually weren't. There were students who admitted that they came to YWAM Honolulu for the surfing, not evangelism.


After several years of this one suddenly wonders where the years flew & have nothing but stamps in their passport to show for it. You then realize you have little financially or any marketable skill in the real world.

I witnessed what you described in your post. Most of the 'new recruits' come with no context about personal responsibility or knowledge of the basic principles contained in Proverbs or even a small portion of the new testament. Those that have said knowledge are likely to have done their homework on YWAM and therefore avoided it. Consequently, those that want to hold on to their unrealistic fantasies about "Christian Missions & Adventure" are drawn like a moth (Peter Pan?) to the flame. The earlier comments about leadership squelching hard questions, is so true from my experience. The unwritten pressure to conform to the group's expectations, peer pressure and "right thinking" as defined by YWAM philosophy is constant and pervasive. Of course the leaders who promote it are themselves brainwashed (deceived) and have internalized the whole thing as God's will and plan for their lives. Its a bit like the frog in the pan of warm water that keeps getting warmer without him noticing it until he is fully cooked.