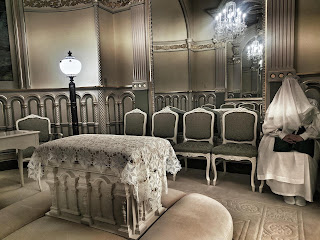 Woman in temple clothing inside a Mormon Temple
I had a pre-planned phone call with a friend I met whilst in YWAM on a ministry trip to the Mormons at the temple opening in Taipei, Taiwan. I went with a small group of others who had a heart for Mormons to pass out tracts in Mandarin Chinese at the temple open house to those who were attending so they could know exactly what happens in the temple that the guides & missionaries won't tell them. They will never know, even years after being members of the Mormon church what goes on in the temple unless they go themselves as they are not allowed to discuss it outside of the temple. This was before you could just google it & discover via video or word for word text what happens.
The one thing I did appreciate in my early years in YWAM was that one of the leadership couples were involved in a ministry to Mormons & the wife had come out of Mormonism to Christ. I moved to Hawaii from very Mormon Idaho, so already had a heart for Mormons when I met them. Unfortunately, the other leaders told this couple that a ministry to Mormons was NOT part of YWAM Honolulu's calling (as if we are not called to ALL unbelievers) so they were pushed out! After they left, the abuse in YWAM Honolulu intensified!
Anyway we met Amy, a young Mormon missionary from Salt Lake City, Utah who was inquisitive about what we had to share & our motive for being there. She was told not to talk to us as the Taiwanese might think that we could be Mormon missionaries as well. She did not do what she was told & we became friends. The next few years, she came (still a Mormon) to stay at the Honolulu YWAM base to spend time with me. She also visited me when I was in Oregon to visit my family & when I was in Idaho visiting friends. I visited her a few times in Salt Lake. Several of us from YWAM went to an Ex-Mormons for Jesus conference in Salt Lake & stayed with her devout Mormon family. The difference in our beliefs did not hurt our friendship. How many professing Christians would have open up their homes to people attending a conference that was anti-Christian?
So as often happens in life, we lost contact for at least a decade. She became a lawyer in LA but due to medical problems, had to quit working. I have prayed for Amy almost every day since we met that she would put her trust in Jesus alone.
I was a bit apprehensive about talking to her again after all this time. I didn't need to worry. The connection was instant. She told me she had gotten married, had gone on another Mormon mission with her husband to Germany & had settled in Salt Lake. She also shared that her marriage was not what she'd dreamed it would be. Most of our lives are not what we envisioned as youth.
I was transparent with her about YWAM and the spiritual & emotional abuse that I experienced there, mostly after we had met. She told me how hurt she was by some of the Christians (from YWAM) who she felt passed judgement on her for being Mormon. Not all showed her unconditional love. It was a great visit for close to two hours! Neither of us judged one another or came across as better than the other or came across as disappointed that we did not eventually come over to the other's side.
We discussed how we could both tell when we were talking with someone whether they were speaking out of love, pride, superiority or whatever. I shared how I do not discuss politics or religion, for the most part on my personal FB page as I have friends who are atheist, Christian, Mormon, Buddhist, Hindu & others. I also have friends who are way left & way right in the political spectrum. I have never noticed in a political or religious argument where one side goes to the other. I have found instead that there are hurt feelings & lost relationships as well as feelings of superiority.
I told Amy that I still have a love for Mormons & belong to FB groups where both mainline Christians & Mormons are members & discuss theological issues. If there is bashing in them, the offending members are banned. Every now & then, someone will get on their high horse (from BOTH) sides and come across holier than though. That attitude NEVER gets any converts!
If you think you can intimidate people to believing a certain way, you are mistaken. Just because someone believes the total opposite of what you or I believe does not mean they are any less valuable as a person or that they are not worthy of love & respect. This does not mean you have to agree with their beliefs or values but should all be adult enough to treat one other with kindness & respect.
Each person's YWAM experience & story of abuse was real to them and personal. We are all individuals & if someone says they were abused, we need to accept that they are coming from an honest place, even if we can not get behind their skin & truly understand them. How many things in our own lives do we not understand? How can we think we can fully understand one another? We ALL want to be heard & understood. Often, we are thinking about our responses rather than trying to hear & understand what is being communicated in an argument or discussion.
We are ALL products of a series of events & people in our lives that make us who we are, believe & act the way we do, be it positive or negative.
We are ALL broken people. Some are just better at wearing masks than others.

PS: When a post looks strange, it is because I could not change the color of the font or background.