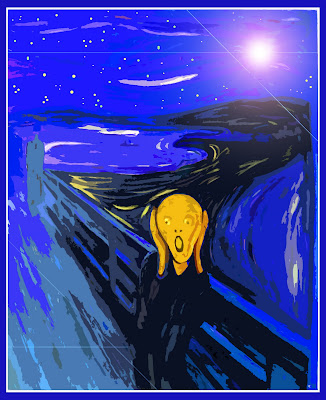 Over the past few weeks, I read through my journals from my years in YWAM from 1983 to 1995. They took a few weeks to read. I was reluctant to “re-live” those years, but felt it was healthy to “face my demons”. What surprised me is that I was not bombarded with nightmares of YWAM while I was reading through those years.

The thing that most come to mind was how many good friends I had on base who were there for me & I for them. I miss that fellowship.

I also saw that early on, I had to put on the mask of who I felt the leadership wanted me to be. We were stripped of our free-will, which is a precious gift from God.

So often, I felt I had no one to turn to who could or would do anything about the abuse. I often felt so alone, even with my YWAM friends.

I realize how much God has brought healing & refreshment to my life since I got out of YWAM, and how especially the few months after I left, how God would provide for me by selling my art work, and through the encouragement & kindness of friends who were still in YWAM (but eventually got out as well).

Reading those journals made me realize all the more how we must not live in fear, and how we must speak up when ourselves or others are being abused. I have so far to go in my walk with God, to fully trust Him & keep my eyes on the Lord rather than abusive persons or situations.

People have often wanted me to shut up about anything negative about YWAM “because all of the good the organization still does”. The good YWAM may do does not negate the abuse that is still committed by leadership there. There MUST be an avenue for people who feel abused in YWAM to be able to address it without fear of retribution from leadership. This accountability MUST be communicated to all schools & staff on how to address these issues.

I will continue to speak up when I see or hear of abuse, wherever it is found & pray others will as well. This is what will help, in some small way, to bring about change and healing.

It almost surprised me yesterday when a person who is in leadership of another international ministry to countries which are for the most part closed, asked me if I might be interested in some short-term ministry opportunities with them as a photographer. I had been involved with this person years ago in ministry (but this is a new one she is involved in) and was surprised that I would actually consider it (It is NOT YWAM).

I will leave this observation with: Ecclesiastes 4:1 “Again, I observed all the oppression that takes place under the sun. I saw the tears of the oppressed, with no one to comfort them. The oppressors have great power, and their victims are helpless. (NLT)”

We MUST speak up for the oppressed!
Posted by Longe Hawaii at 1:51 PM

Hi. Thanks for writing of your experience with YWAM. I just finished with my DTS and have had a similar experience with the leadership of my DTS.
One day soon, once things have settled, I will write of my own experience as well. I just want to take some time to process it all. One thing I am confident of is this: "And we know that in all things God works for the good of those who love him, who have been called according to his purpose." (Romans 8:28)
Even though it was a bad experience, God can and will use it for His own glory. I read also on a YWAM website that during the YWAM 50th celebration leaders repented of the hurt and pain people have felt from YWAM. They know it is happening. We can only pray that they not only repent and ask for forgiveness, but deal with it.

Thank you for speaking up. I am alarmed at how many people have been through the same experience and have "survived" abusive leadership. I came out of YWAM with depression and chronic fatigue symptoms as well. It is taking alot of time to heal. Thank you again for sharing.

In the past it has not been well known but there has been evidence for years that YWAM not only practices cultlike and unbiblical practices, but that much of their theology is questionable also (from a biblical standpoint).

Although there are very many well meaning Christians involved with YWAM, and although practices and experiences may differ at different places and times, nonetheless it
is a fact that YWAM is an organization that young Chrsitians need to fully inform themselves about. It is unfortunate that problems exist, however a person considering going into this organization has the right to the full picture, both
good and bad.

I have read many reports of people who were badly harmed at YWAM.

I myself went through a horror story which, by the way, I should point out
is not unique to YWAM, but has characteristics shared by many Christian churches and ministries today.

I was literally thrown out of an American YWAM by the leadership. My crime was
that I was at that time a Catholic, which I clearly told them before entering.
I told them I had no intention of changing which they agreed to upon my entrance.
(Later I left Catholicism on my own when I realized it was wrong).
I asked whether there might be another facility for Catholics. For this question I was thrown out physically, allowed to make only one phone call, and dumped in the airport. If it had not been for the generosity of an acquaintance whom I had called who agreed I could stay temporarily with her, I would have had no where to go and no money (we were required to purchase a two way airplane ticket at the
very beginning but other than a plane ticket I had no money and I could not return to my family as they were abusive and would not receive me anyway).

I have seen this type of an almost ritualistic purge take place also in other Christian ministries, including Teen Challenge. Again, Teen Challenge is run like a franchise and so how it is run and what they teach will vary with location.
I saw a ministry intern or staff person run out of the Teen Challenge because she
was scapegoated. They did not like her for some reason and she ran back to
her family. After she left they told me she had lied.

It is wonderful that there are Christian ministries who take in hard cases and
teach the Bible. It is also understandable that this is a very difficult ministry for a limited staff on a very tight budget, and that stress and mistakes will
occur.

However I think the practice of throwing people out for minor infractions at a moment's notice (or no notice) is abusive. People should be told the rules
clearly, and warned if they break one. People should not be thrown out for an
opinion or a minor infraction. At Teen Challenge they threatened to throw me
out because I asked a question about getting to my luggage...and I was also called rebellious because I dropped a cloth on the floor accidentally.

The fear and cult like atmosphere produced is not healthy.

I realize a solution is difficult given the type of ministry and the type
of clients that are helped.

Still, some type of reform is needed.

One staff memeber at YWAM was thrown out and wrote a book about his experiences.
It used to be online free.

YWAM teaches many strange and unbiblical doctrines. Some have changed over
the years.

There are many reports of serious problems and abuse at YWAM. I regret this
is the case and I do not dismiss the good that they do or the people who
go there. Of course any community, ministry or church will have its problems.

However the cult like problems are unique to some and should still be exposed
for the good of those considering YWAM as well as for those involved in YWAM
itslef (leadership and staff and others), and for the healing of those who
were wounded.

Ideas that foster absolute authority (tyranny), forced confession of ones "sins"
to the others, and other fear based tactics along with heretical or questionable
teachings should be investigated.

You can go to "Let Us Reason" website for more.