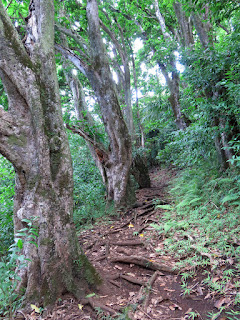 There are now 176 members in the Facebook group I started, “Spiritual Abuse in YWAM”. I have heard so many abuse stories that took place in YWAM. Many have symptoms of PTSD years after getting out. I have been out of YWAM Honolulu since 1995 yet still have nightmares of being back in the cult of abuse & control. The past couple of years, there has finally been some healing with fewer & less dramatic nightmares when I do have them.

Looking back from the time I got out, I didn't see growth and healing in my life on a daily basis but see growth in the process of time. I feel closer to my Lord now than ever in my life. I still don't trust Christians in authority (even though my father was an example of a godly pastor) so do not regularly go to church. Instead, I listen to Christian topics on YouTube while I paint watercolors that I pray reflect the Master Artist.

My closest times with the Lord in fellowship with Him are when I go on my hikes in the Hawaiian rain forest. It is easier to talk to Him there than at home. I am so thankful that I do not need to play by “YWAM rules” to grow in my relationship with Him. I do not need to go through the (copyrighted by Joy Dawson) YWAM steps of intercession to get to the throne of Grace.


I often pray for those who are members of the little Spiritual Abuse in YWAM group, especially those who now consider themselves atheist due to the spiritual harm they experienced during their time with YWAM. I pray God brings some godly examples of Jesus to their lives to show them His love & grace. I know, had I not had examples of godly Christians in my own life (including my parents) before I went into YWAM it would have been easy for me to leave Jesus behind the door when I left YWAM as well. Still, he woos those who have given up on Him back to Himself.
Posted by Longe Hawaii at 12:29 PM