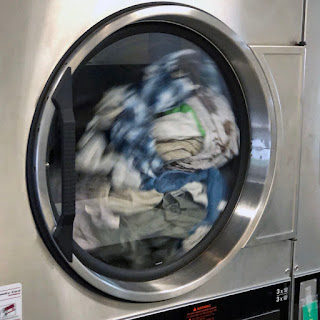 I just came back from talking to my largest YWAM audience ever! I never talked to that many "heathens" whilst in YWAM. Anyway, I was doing laundry in Manoa where single staff & students have to do their laundry from YWAM Honolulu. I saw a group of 12-15 of them & knew instantly they were with YWAM. (When I was in YWAM one of the perks of the married families was to be able to do their laundry on base.) I saw two girls put at least 10 loads of laundry in a dryer designed for 2 & put in .25 cents, as if they would dry in 6 minutes! I then asked if they were with YWAM, which they confirmed they were. I was surprised that they didn't ask me how I knew or why I would ask. I then told them it would take hours for their laundry to dry with that much in there.

I was about to leave & my heart started beating faster as I knew I could not miss this opportunity to "testify" to this large group from YWAM. They were sitting down on benches by the door. I walked up to them all and announced, "Have any of you ever googled YWAM abuse or YWAM cult"? It was suddenly very quiet. 2 in the group said that they had done that. One asked me if I had written the blog about abuse in YWAM. I responded, "Which one? There are many!"

I then told them that I had been at YWAM Honolulu for 12 years and that I has started a FB group about spiritual abuse in YWAM and that there were now over 300 members. I told them that there were a lot of the same stories from bases around the world that experienced abuse. Most were committed by leaders whose heads got too big and would manipulate by saying things like, "God told me to tell you" and "Are you questioning my authority"? I said that the Bible says if someone makes even one prophecy that does not come true, they are not of God.

One of the young women with blond & pink hair said, "There are abusive people in churches too!" I agreed with her. I told her that is why whenever someone tells you doctrine or makes demands that are not biblical, you are not to accept it. I also shared that there are a lot of young Christians in YWAM who equate God as having the same attributes as YWAM leaders & loose their faith in God as a result.

I said that in openess & brokeness they want you to confess publicly your past sins- even though they have already been forgiven and washed in the blood of Christ! I told them that often times, those you confess past sins to will hold it against you as if you are still involved in those sins.

I mentioned how several times I had heard, "Are you questioning MY authority?!!" I told them they have every right to question someone's authority! I said that when I share the gospel with people, I tell them not to take my word for it but look up what I have said for themselves & see if it is true. I brought up the steps to intercession & how dead they were & often people would be shamed into "getting some kind of word from the Lord" and that often times the things there were brought up was just crazy talk. I told them I didn't expect anyone to admit to it, but I was sure there was someone there who hated intercession!

I shared how I offered to lead a time of intercession once to pray for Russia but was told I couldn't, as the base was not called to Russia (even though they sent a team there about a year later). I also told them how I was involved in a ministry to Mormons on base but the other leaders told the leaders who headed the ministry that the base was not called to Mormon ministry so forbade them to continue it!

I mentioned to them that there could be someone in their group right now who feels oppressed & abused & wonders what is wrong with them. I said I used to feel that way because I trusted "Christian" authority too much at the time but ended leaving YWAM spiritually & emotionally dead!
I also said I had healed a lot since then but still have nightmares of being back in YWAM.

This whole time they listened intently and said nothing! I said that there may be people there who have a great YWAM experience & how I hoped that that would be the case.

Though maybe none of them agreed with me, I know I still planted seeds & when it happens, they will remember the "crazy man" who insinuated that YWAM is a cult.